Of course you are going to hear this over and over, and over, and…. 2010 is the hottest year in Canada and we are doomed because of runaway global warming.

Indeed, in Southern Ontario we had a rather hot summer, had the AC on for several weeks, last year not at all. Gee, have I been wrong? (other than central Canada was the coolest and wettest in decades, we will check that later)

This time the back line is the average. If this was a normal year, that black line should track either side evenly along the grey line. It’s higher in those days where the max was high at the beginning of the year, but in the summer it tracks exactly right on the century average.

And this black line is the minimum daily temp. 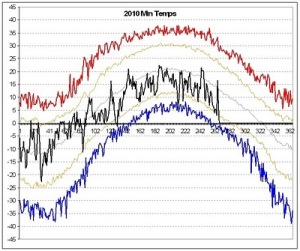 The winter saw min temps this year higher than the century average. Otherwise, nothing unusual afterwards. Sure was good for the heating bills!

Finally, the number of days above 30C.

Nope nothing usual there. Note the heartbeat like pattern. One year few days above 30C, the next year more, and then back to few again. 2010 has 22 days above 30C, where as the summer of 1955 had 42. Clearly prior to 1920 had far more years with days above 30C than today.
So, Gord Miller, explain how you come to the conclusion that 2010 is the “hottest” year and proves global warming. Go ahead, defend your position.