If it’s hot one year, what will it be next year?

The heartbeat-like pattern of the hottest TMax of the year begs a question. Can it be predicted what this year’s hottest temp will be based on the previous year?

This is station 1111, Chreston, BC yearly highest TMax:

This is one of the few stations that shows an increase in TMax since 1990, but still not near the 1930’s and 1940’s. But notice the ups, then back downs. Is there at pattern to this? Once one year reaches its highest temps, what is the probability the next year will be higher or lower?

I then added up the total count of each integer TMax, and the total number of each percent lower and got a percent of how likely it was for the following year to be cooler for each TMax.

I then did the same for each percent would be hotter for each TMax to get this plot:

This is the range for each TMax that the following year would be lower: 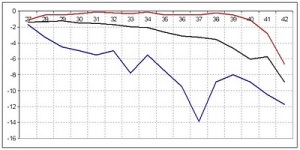 So if a year is at 40C, there is a 95% chance that the next year will have a cooler maximum TMax of between 2 and 9C (38 t0 31C). So even though there have been cooler TMax in some years below 31C, from 40C there is virtually no chance that the following year will be under 30C for its highest TMax.

This next graph is the reverse. With low TMax for one year, what is the likely range of the increase in the following year? 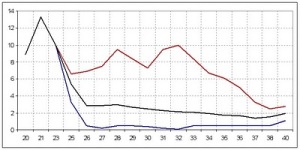 Combining the two plots, if a year has a TMax of 32C, there is a 40% chance the next year will be higher or lower, and the range would be from 1C to 10C hotter, or from 1C to 5C cooler.

It almost appears that 32C is the mid point. Continuing the pendulum analogy, 32C is the bottom of the swing. Anything either side of that and the tendency is more to move back to 32C than it is to go higher or lower.

Is this median point changing over time? Unfortunately there are not enough data with only 28 stations to evaluate this and plot, so instead this is the matrix of years vs TMax and the number of times in each year for each TMax there are records.

The last test is how often when there is a rise between two years, what is the probability of the the following trend up or down? For this test I took all records where the first year was over 32C (our median) with an increase the following year. I then looked at the number of subsequent years showed a decline, the number of a successive increase and the number of no change. There were 771 records in total, of which 71% showed a drop after a rise. That is, when there was a spike up in temp from one year to the next, the following year after that has a 71% chance of being a drop producing a spike. 23% have a continued increase after the second year and 7% were the same, no change.