This post will look at the problems associated with looking at a short record of years and implying some sort of trend.  Linear trend lines on oscillating data is entirely dependant on the range of data.  Linear trends will increase as the data moves into an upward part of the cycle, and then downward as the data falls down the back side towards a trough.

To show how this is a problem 3 close by stations in British Columbia, two with short time spans, with one with longer spans, will be plotted together so you can see what happens when long-range data is not included.

One could claim this is an over all increasing trend.  But is it with such a short timeframe?

Let’s compare Kamloops to near by Vernon:

Notice where the two overlap their data follows the same pattern.  But now you can see that the early 1900’s were just as warm in the summers as now.  So too then must have Kamloops.  Notice the trend for Vernon is downward between 1900 to 1996. 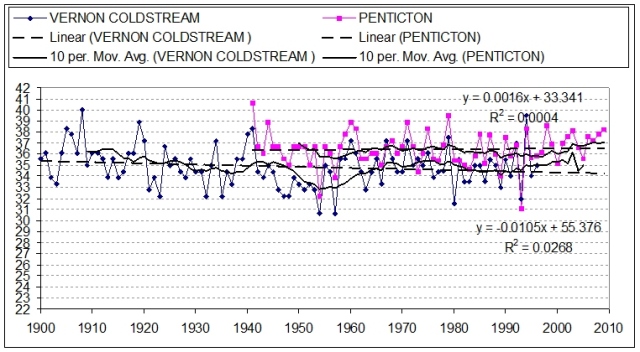 Same thing, the overlapping periods follow the same pattern and hence summer temps in Penticton would have been just as warm in the early 1900s as today.

Thus, one must get as long a recordset as possible to have a period to compare to when one claims the temps today are “unusual”.