The Glass Half Full.

Climate change alarmists claim the planet is getting warmer due to CO2 acting like insulation.  Actually, it isn’t getting warmer.  What the actual daily temp data shows is that winters are getting shorter and less cold.  But wait, isn’t that just saying the same thing?  No it is not.  The two are very different.

I will explain why with a series of analogies.  This glass, is it half full or half empty? 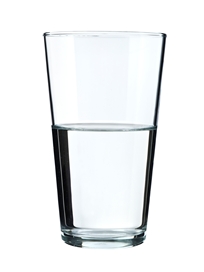 What you answer is often claimed to be a view of how you see the world.  But in reality, how you answer is about how the water became half way in the glass.

If the glass was half filled, with new water (this is key), then it is half full.  If the glass started filled to the top then half removed, it is half empty.  If you don’t know which of those happened, then the best you can say is the glass contains half its contents.

How does this relate to temperature changes?  Well, the first case, filling the glass, is new water.  However, the glass emptied does not contain new water.  It contains the same water you started with just reduced by half.  What’s left is not new water.

It’s no because the 10C difference in the winter is not new heat.  It’s not new energy.  It is less of a loss of summer energy that was already there and lost during the winter.  Same with the day temp range.  The sun heats the planet during the day, say to 30C, and cools at night.  That is, the energy is already there in the mid day and is lost when the sun goes down.  Going to 20C instead of 15C at night isn’t new energy, just means less energy is lost.  That 5C “increase” is not new energy.

Climate alarmists will just say this is all semantics.    Of course they have to say that to keep the warming alarmism alive.  But the reality is that the “warmer” isn’t new energy.  It’s less of a loss of energy that was already imparted to the planet from the sun.

1 Response to The Glass Half Full.