The growing season is the time between the last Spring frost and the first Fall frost.  This is what has happened the last 100 years.

This is a very interesting graph for a number of reasons.  First, the growing season is longer now than it was in the 1930’s at only 120 days at one point to 165 or so today.  On average we have around 30 more days frost free in our latest years.

Second, we have seen that the 1930s had the hottest years, the deepest coldest years, but now we see also the shortest summers.

Third, note the the inflection to the increasing in growing season started in the 1950s, and slowed in its rate in the late 1970s.  Isn’t that when the start date was supposed to be for human caused global warming?  Our CO2 emissions SLOWED the rate we had of increasing the length of summer?  One can also argue that since 2000 there was no more increase in the number of frost free days.  Looks like one of the manifestations of The Pause.

This graph shows the day of the year for each.  Spring is the lower line, fall is the upper line.  The regression line shows that spring frost is receding faster than the Fall frost is receding.

This graph shows the last Spring frost in more detail.  The arrow points to May 21, which is considered the first day one can plant their veggies, when actually now people can take the chance of planting after May 15.

On the other side of the summer, this is the first frost in the Fall. 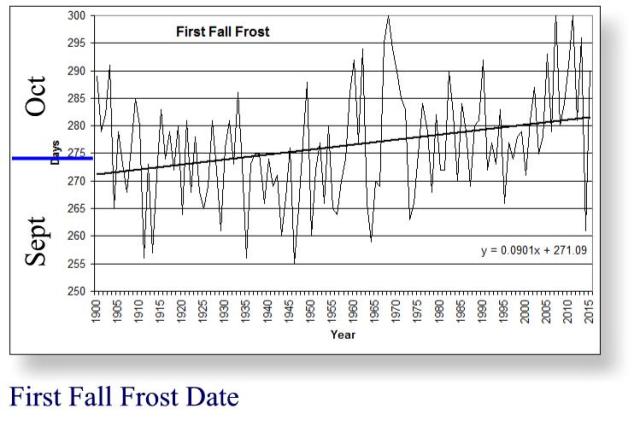